The scene at 17 Rosa Road on Wednesday afternoon looked and felt like a family reunion. Hugs and double-cheek kisses flowed freely, cookies sat neatly arranged on a nearby picnic table, and no doubt more than a few sweet memories were revisited.

But at the center of the gathering was a pile of dirt from which 10 gold shovels protruded. It was a sign of an exciting new step in a long-discussed community project, but also a reminder of an absence that was deeply felt.

The Falvo family, including many friends who have become like blood and a few assorted politicians, finally broke ground on a project in memory of Jack Falvo III. Falvo died July 17, 2005, in a jetskiing accident at the age of 21. Now, Jack's Place, a comfortable, free home away from home for families of patients at nearby hospitals, including Ellis and Sunnyview, is progressing toward reality.

A few months after his son's passing, Jack Falvo II said he was reluctant to work on a project in his name.

"The pain was new and deep," he said.

But his loved ones wanted to honor the younger Jack Falvo's memory, and his father was persuaded.

"The family, they're the ones that really pushed for this," he said.

They discovered there was a need for affordable lodging for patients' caretakers during extended medical care and got to work solving the problem.

After nine years of golf tournaments, breakfasts, pasta dinners and other fundraisers, the family was ready to purchase land for this future home away from home. Two other sites were almost purchased before the Rosa Road location, and for a time, the family considered other options to memorialize the youngest Jack Falvo.

"We've gone through two almost-houses that really fell through," said Nick Falvo, a board member of the Jack Falvo III foundation and brother to Jack Falvo II. "We've been through a number of laws through the city that we had to hurdle."

The land they eventually bought has a house on it, but it will be demolished.

Jack Falvo II said he was never worried about the project's fate.

"I knew we would find a place," he said.

The most recent speed bump occurred last week, when the groundbreaking, originally scheduled for Aug. 13, was rained out. Luckily, the change in date didn't seem to affect attendance at all.

The family hopes to open the house next spring or early summer. It will include eight bedrooms, each with a bathroom and shower, and a shared living area for guests. Once construction is complete, the family will look for furnishings.

"Everything in your home needs to be here, times eight," Jack Falvo II said. "It's going to be the comforts of home."

It's fitting that such a close-knit group would provide for other families.

"We're here because of the love," said Kate Falvo, Jack Falvo III's mother. "We're amazed at the amount of support we have."

Carrie White, who was Jack Falvo III's longtime girlfriend, attended the ceremony with her young daughter and son, who she said had become like adopted grandchildren to the Falvos. A teacher in Schenectady, she said she would continue to support the project.

"I plan on getting my classroom involved," she said.

The groundbreaking was a triumph, but there's still lots to be done. The family will continue to raise money, and they'll need volunteers to help with the interior of the house once the frame is complete. They're looking for help with plumbing, heat and air conditioning for the house and soon will need donations of home furnishings for all eight bedrooms.

"It really makes the family feel good about what we're doing to keep his name alive," Nick Falvo said of his late nephew. "We're going in the right direction with that."

Jack Falvo II said he's happy to be serving families in need. Mostly, though, he misses his son.

"It'll never heal," he said. "I still get choked up talking about it." 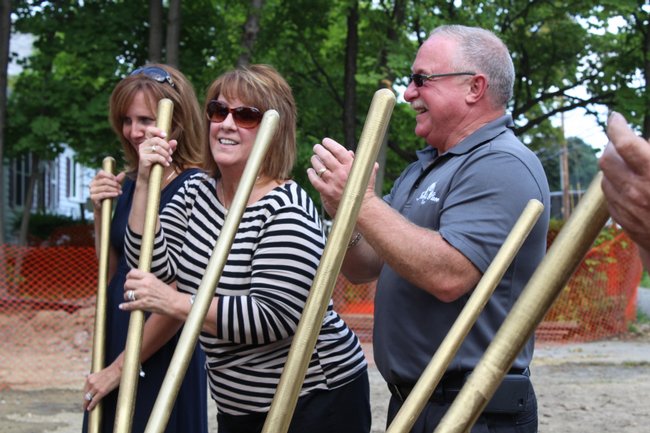 Kate Falvo, center, and Jack Falvo II, right, mark the start of work Wednesday on Jack's Place, named in honor of their son, Jack Falvo III, who died at age 21 in 2005.